The Pembina County Job Development Authority (JDA) Board of Directors convened on Wednesday, November 9, 2016 at the U.S. Customs and Border Patrol Station in Pembina, ND. 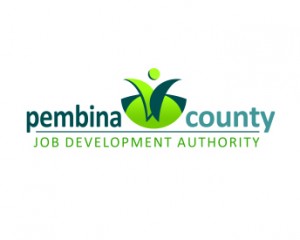 The JDA approved two grant requests including $5,000 for the restoration of the Gardar Township Hall presented by Duane Jonasson and $1,235 for the redesign and printing of the joint Pembina and Walsh County Historic Preservation Commission (HPC) brochure to include information on the geocaching project. The HPC will be printing sufficient quantity to be in the rack program in all rest stops on I-29 and I-94, up from four locations this past year. The board heard from Ryan Blumhagen, Senator Heidi Heitkamp's Grand Forks office, seeking input on onerous federal regulations impacting people and businesses in ND. Several updates were presented including Frost Fire, the Business Retention and Expansion Project, MFG DAY, and the Rendezvous Region Tourism Council. The JDA also received a tour of the new Border Patrol facility and had the opportunity to try out their 300-degree defense training simulator. 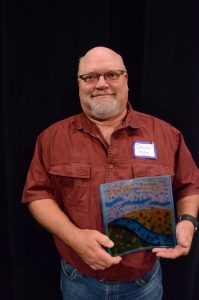 The Red River Regional Council (RRRC) honored 21 nominees and provided four awards at its annual Ideas to Actions Summit held November 1 in the Grafton Public Schools Performing Arts Center.  Attended by more than 130 people, the event was designed to celebrate people striving to build their communities and inspire those interested in boosting the tourism industry in northeastern North Dakota. 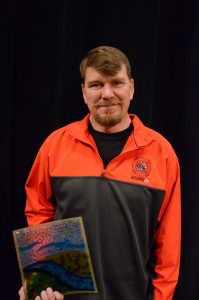 The event included a workshop prior to the event that featured speakers including Sara Otte Coleman, Tourism Division of the ND Department of Commerce; Mark Zimmerman, Matt Gardner, and Mike Duerre, ND Parks and Recreation; and Julie Rygg, Grand Forks Convention and Visitors Bureau. The event concluded with the keynote event which included presentations by Dawn Keeley, Executive Director of the RRRC, and Greg Tehven, Emerging Prairie, as well as presentation of the impact awards.   “We are so proud of the quality and quantity of individuals and groups of community builders that contribute so much to the communities of this region,” said Keeley. “It’s an honor to have the opportunity to celebrate them and their work that is so impactful.” Great Ideas, Projects and Leaders Recognized The RRRC awards program was designed to recognize and reward the leadership and commitment demonstrated in communities across the Red River region. A total of 21 nominations from across the four-county region were received for the three categories. Winners were selected by the RRRC Board of Directors. The three categories included: 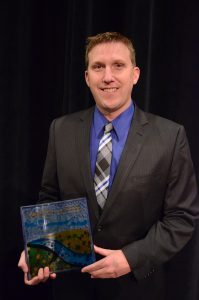 The awards were hand-crafted glass creations by Jason Lindell, Sundog Glass Design, Park River. All nominees were also provided a “Community Builder” recognition keepsake. For a complete list of all nominees, go to the RRRC’s website at www.redriverrc.com or the Red River Regional Council’s Facebook page. The overall purpose of the Ideas to Actions Summit is to provide an opportunity to inform the public of the goals and activities of the Council, to create excitement about the potential of the region’s communities, and to recognize the excellent work of the region’s communities. The RRRC serves a four county region including Grand Forks, Nelson, Pembina and Walsh counties. Photos courtesy of Todd Kjelland, Walsh County Record

The Red River Regional Council (RRRC) has received funding from the Bush Foundation/Consensus Council Community Innovation Grant and the Pembina County Job Development Authority to assess tourism potential in Northeastern North Dakota. In 2014, the Pembina County Strategic Planning Committee developed an immense tourism strategy that was adopted as part of the five year Pembina County Economic Development Strategic Plan.  Also in 2014, the ND Parks and Recreation Department received input from more than 250 people for the Pembina Gorge State Recreation Area Master Plan.  These two documents are leading the efforts for the evaluation and pursuit of a variety of tourism and outdoor recreation opportunities. "We are excited to be a part of this project as there is so much untapped tourism potential in northeast ND.  There are more than 1.2 million people located within an easy two-hour drive of the Rendezvous Region, and many are unaware that it even exists.  We are embarking on a journey to build upon more than 25 years of efforts to grow the Rendezvous Region and create excitement to travel to the northeast corner of the state." said Maggie Suda, RRRC Developer.  With the funding received, the RRRC has hired Jolene Halldorson as the project lead to implement the tourism assessments and develop a northeast ND tourism council. Tourism touches all aspects of a community – businesses, government services, the natural environment, and residents.  Halldorson will be seeking individuals for discussion and decisions that will help create a positive attitude and a healthy tourism industry that is in harmony with each community’s values. This project will be done is three phases.  Phase one is to identify the tourism attractions and the potential in our communities.  Phase two includes an inventory assessment of the Rendezvous Region tourism attractions and phase three will be evaluating the inventory assessment to see what tourism attractions have the greatest chance of success. The RRRC has developed an online survey to gather the information for phase one.  The survey can be found at https://www.surveymonkey.com/r/69X7MTV please take the time to participate. If you have any questions or would like to be an active participant on the tourism council, please email Jolene, Jolene@redriverrc.com.