Celebrating the big ideas and hardworking, creative people living in the small towns of our region is a focus of the 3rd Annual Ideas to Actions Summit, hosted by Red River Regional Council (RRRC).  The event will be held November 2, 2017, beginning at 4:00 pm at the Minto Community Center in Minto, ND.

The Summit, in addition to its annual gathering and awards program, will include a Mayors Caucus. Invited to the caucus are all mayors, city and county auditors, city councilpersons, and county commissioners. The Summit and Mayors Caucus are open to the public.

Lt. Governor Brent Sanford will kick off the Mayors Caucus with discussion on the Main Street Initiative and will be a special guest at the Summit. He is interested in feedback on potential state program and policy changes that would further strengthen and build healthy, vibrant communities.  Lt. Governor Sanford was the keynote speaker at the first Ideas to Actions Summit in 2015 while he was Mayor of Watford City.

“We are excited to have Lt. Governor Sanford join us again this year and invest time learning more about our region from our city and county leadership,” Mayor Dan Stenvold, RRRC Past President and co-host of the first Mayors Caucus in January 2016.  “As a former Mayor, Lt. Governor Sanford brings an appreciation for the day to day work and the many partnerships required to develop a healthy, thriving community.”

The Mayors Caucus will also include a “State of the Region” economics presentation by Mark Schill of Praxis Strategy Group and “Building Your City’s Economic EcoSystem” with Blake Crosby, ND League of Cities.  Officials will have the chance to discuss trends, challenges and opportunities for the four-county northeastern region of North Dakota.  The goal of the Mayors Caucus is to continue to build strength of regional unity through engaging our city and county leadership.

Summit keynote speakers offer unique perspectives on the story that needs to be told of our small towns and rural life. Speakers include Benjamin Winchester, Senior Research Fellow at the University of Minnesota Extension Service, who has been working both in and for small towns across the Midwest for more than 20 years and has conducted applied research on economic, social, and demographic topics surrounding a theme of “rewriting the rural narrative.” Another speaker will be Christopher Ingraham, reporter for the Washington Post, who in 2015 called Red Lake County, MN “America’s worst place to live,” prompting a subsequent visit to the region, an apology tour, and finally, a change of heart that resulted in him moving there with his family the following year.

The Summit agenda also includes celebrating the 13 nominees for the annual awards program.  All nominees will be showcased and four award winners.  The four awards include:  North Star, ideas that illuminate opportunities or create a guiding light for progress within a community; Catalyst, an individual who acts as a “Kickstarter” for an idea or project; Determination, successful projects that create a significant impact on a community; and Intrepid, the most audacious organizations or thinkers who have transitioned a visionary idea to literal, concrete results that impact the entire region.

“We are excited to honor the 13 outstanding nominees that are actively working to better our communities every day,” said Chris Lipsh, RRRC President.  “Reviewing these nominations, we reflect and deeply value the time, talent, and commitment each of these folks have invested and are achieving results to advance our region.”

The purpose of the Ideas to Actions Summit is to provide an opportunity to inform the public of the goals and activities of the RRRC, to create excitement about the potential of our region’s communities, and to recognize the excellent work of the region’s leaders and communities. The agenda for this year’s event starts with the 4:00 pm Mayors Caucus, a networking social, the keynote event, and the awards presentation.

All events will be held at the Minto Community Center and are free and open to the public with RSVPs requested by October 23 at 701-352-3550 or lori@redriverrc.com. 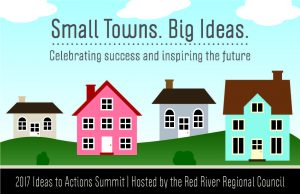